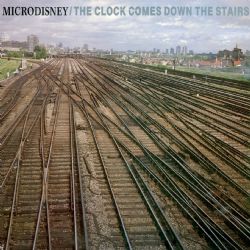 The Clock Comes Down The Stairs
Microdisney

After
relocating toLondon,
they signed toRough Trade, and utilised John Porter(producer ofThe Smiths)
to produce their debut album,Everybody is Fantastic. At this time, the band
became acquainted withJohn Peel, who championed their music, and gave
them the first of several celebrated Peel Sessions

Originally
released in 1985,The Clock Comes down the Stairs was the first of
three albums–the other two are the ensuing releases Crooked
Mileand39 Minutes–on which this superb band finally got it right.

It was never
an easy equation for Microdisney to balance–the musical prettiness of Sean
O’Hagan and the lyrical savagery of Cathal Coughlan–but it all adds up here
rather wondrously.The Clock Comes down the Stairs seems to be
Coughlan meticulously chronicling his own decline. As is invariably the case
with Coughlan, however, the decline of everyone and everything else also gets a
mention.

In the
mid-1980s, bands were either in the charts, which meant they sounded like
Wham!, or they were alternative, in which case they sounded like The Jesus &
Mary Chain. Nobody really knew what to do with a collection of recalcitrant
Irishmen whose music evoked Jimmy Webb, Steely Dan and The Walker Brothers, and
whose words were consumed with paranoia and disgust. On “Goodbye It’s
1987”–a startlingly unconcerned-sounding prediction of Armageddon–Cathal
introduces one of O’Hagan’s impeccable guitar solos with the muttered
exhortation “Let’s tax the wages of sin”. In the summer of Live Aid,
it was never likely to be a big radio favourite.

This re-issue –
made in conjunction with the band – contains rare single B-sides and the
complete Peel session recorded at the time. With notes in collaboration with
the band by Terry Staunton and a book packed with memorabilia this release
serves as a great re-introduction to this finest of Irish bands