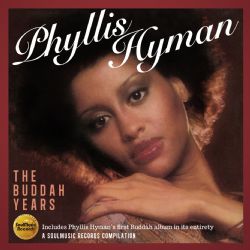 Eighteen years after her passing in 1995, soulful songstress Phyllis Hyman remains one of most appreciated and loved singers of her time. SoulMusic Records pays tribute to the distinctive vocalist with a third release following the 2013 reissues of two of her Arista albums, 1979’s SOMEWHERE IN MY LIFETIME (SMCR-5092) and 1983’s GODDESS OF LOVE (SMCR-5095) with a collection that focuses on her recordings
for Buddah Records (1977-1978).

Incorporating her self-titled 1977 LP debut (available on CD for the first time in its entirety in many years), THE BUDDAH YEARS also includes the dance-flavoured “You’re The One,” a track left off the original album, and three songs – ‘Soon Come Again,’ ‘Be Careful (How You Treat My Love)’ and ‘The Answer Is You’ – recorded for Buddah, originally released on the 1978 non-US LP, ‘Sing A Song’ and then included on her 1979 US Arista debut.

With production by Jerry Peters, John Davis and the team of Larry Alexander (her then-husband) and Sandy Torano, the “Phyllis Hyman album” showcased the songbird’s ability to fuse pop, soul and jazz. Highlights included a beautiful reinterpretation of “I Don’t Want To Lose You,” (originally recorded by The Spinners), songwriter / producer Thom Bell’s ‘Loving You, Losing You,’ (a Top 40 R&B and dance hit single) and the Hyman fan favourite, ‘The Night Bird Gets The Love.’

2. NO ONE CAN
LOVE YOU MORE

6. WAS YESTERDAY
SUCH A LONG TIME AGO

7. THE NIGHT BIRD
GETS THE LOVE

8. BEAUTIFUL MAN
OF MINE

9. CHILDREN OF
THE WORLD