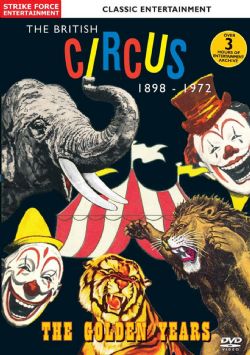 SKU: SN6729
Categories: Physical, SFE, SFE Christmas Sale, Sitewide Sale
Share:
Description
‘The
British Circus 1898 – 1972’ is the most comprehensive DVD overview ever of the
‘Big Top Big Thrills’ of the British Circus – one of the most popular
entertainments of our time!
Starting with
the 1948 short film ‘A Circus Story’ filmed at the 7,000 seater Belle Vue
Circus, we are introduced, both backstage and ringside, to an array of
fabulously talented performers that make the Circus ‘The Greatest Show On
Earth’; equilibrists, balancing acts, high-wire jugglers, trapeze artists,
performing animals – Shetland ponies, dogs, sheep, horses and elephants –
clowns with their grease-painted faces and slapstick routines and the highly
respected act, Balliol and Merton, whose acrobatic adagio dancing is a
breath-taking display of balance and poise.
But the bulk
of this DVD is dedicated to a chronology of the British Circus starting with
1898 footage of the Barnum and Bailey Circus arriving in Sunderland. Many
circus companies are subsequently featured including Tom Arnold’s Harringay
Circus, Billy Smart’s Circus and Bertram Mills, famous for their enormous
Christmas Circus extravaganzas at Olympia. There is also a 1938 visit to a
circus skills training academy in France that gives an insight into the arduous
and dedicated training involved.
This DVD is a
veritable non-stop celebration of circus acts of yesteryear including tumblers,
trick cyclists and unicyclists, the human cannonball, acrobatic comedians, the
flying trapeze, plate-spinners and an elephant ballet among a treasury of
performing animals including tigers, panthers, sea lions, chimps, polar bears,
lions, dancing greyhounds, zebras, horses and a canine football game!
But the
perennial circus favourites are always the madcap antics of the clowns,
including the most famous of all – Coco The Clown!
BONUS FEATURES
Circus From
New York and Germany, Newsreel Report, 1936. Circus From Australia, Newsreel
Report, 1938. Here Comes The Circus, Short Film, USA, 10 mins, 1942. The Jumbos
Arrive, Newsreel Report, 1972.