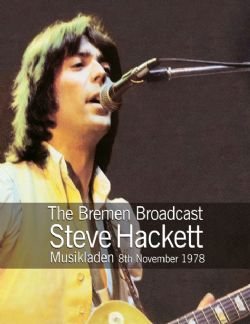 · STEVE HACKETT UK CONCERTS IN THE AUTUMN OF 2013

Esoteric Antenna are pleased to announce the release of Steve Hackett’s legendary performance on the German TV show “Musikladen”, recorded in Bremen on the 8th November 1978. Taped in front of a small studio audience, the performance featured Steve’s newly formed band of John Hackett (flute, guitar, bass pedals), Nick Magnus (keyboards), Dik Cadbury (bass), John Shearer (drums) and Pete Hicks (vocals) and was recorded prior to the release of the album “Spectral Mornings”. Steve now reflects; “At the time of the recording of the Musikladen show in Germany, we struggled to meet the needs of the studio technicians who wanted us to turn down our amps…We got out of it in the time honoured way by doing what we liked on the night and up went the amps to eleven as usual! On reflection I think it all came outreally well. The band were very much on form and I’m proud of the performance. It was part of the first tour with my own team and in places it felt like a rocket lifting off”.

This Esoteric Antenna release is Region Free in the NTSC format and has been assembled with the full co-operation of Steve Hackett. It features two bonus tracks that were recorded but not broadcast on the final programme.