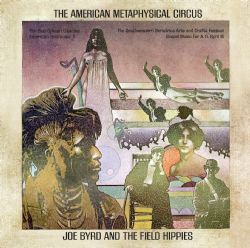 SKU: ECLEC2483
Categories: 10.95, Esoteric Recordings, Esoteric Sale, Physical, Sitewide Sale
Share:
Description
• A NEWLY REMASTERED RELEASE OF THIS CLASSIC PSYCHEDELIC  / EXPERIMENTAL ALBUM FROM 1969 BY JOE BYRD (Ex- UNITED STATES OF AMERICA)
• FULLY RESTORED ARTWORK & BOOKLET WITH NEW ESSAY
Esoteric Recordings are pleased to announce a newly re-mastered official CD edition of the classic 1969 Psychedelic / Experimental album “The American Metaphysical Circus” by JOE BYRD & THE FIELD HIPPIES.
Joseph Byrd was a key member of the highly influential American Psychedelic group UNITED STATES OF AMERICA. The band’s self-titled album from 1968 was a ground-breaking work in American popular music, although Byrd departed the band to pursue new musical interests.
Securing the backing of Columbia Records, he assembled a new group of musicians (including noted saxophonist Tom Scott) and a series of recording sessions produced “The American Metaphysical Circus”.
Even more experimental than his work with United States of America, Joseph Byrd produced a masterpiece that was to feature clever use of tape loops and some of the earliest use of synthesizers in rock music. A stunning album that would influence future generations of musicians, “The American Metaphysical Circus” is now regarded as a landmark release of American music in the late 1960s.
This Esoteric Recordings edition has been newly re-mastered and restores the original album artwork. It also features a booklet with a new essay.
N.B: This title is released March 30 and will not be dispatched before his date.
Track Listing:
THE SUB-SYLVIAN LITANIES
1. KALYANI
2. YOU CAN’T EVER COME DOWN
3. MOONSONG: PELOG
AMERICAN BEDMUSIC I – FOUR DREAMS FOR A DEPARTING PRESIDENT
4. PATRIOT’S LULLABYE
5. NIGHTMARE TRAIN
6. INVISIBLE MAN
7. MISTER 4TH OF JULY
GOSPEL MUSIC FOR ABRAHAM RUDDELL BYRD III
8. GOSPEL MUSIC
THE SOUTH WESTERN GERIATRICS ARTS AND CRAFTS FESTIVAL
9. THE SING-ALONG SONG
10. THE ELEPHANT AT THE DOOR
11. LEISURE WORLD
12. THE SING-ALONG SONG (REPRISE)
Additional information
Tracklist
Track listing as above.
Reviews (0)