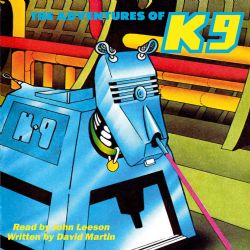 The Adventures of K9
John Leeson

• K9, the amazing robot dog already known to millions through his star appearances in the Doctor Who TV series, now features in an exciting set of four audio stories of his own!

• All four of the audio stories were written by K9’s co-creator DAVID MARTIN and have been newly recorded by JOHN LEESON, who voiced K9 in Doctor Who.

• Doctor Who celebrates its 50th Anniversary in November 2013 and these four stories will be welcomed by the world’s longest running sci-fi show’s millions of fans.