We use cookies to ensure that we give you the best experience on our website. Click OK to accept and continue shopping, or find out more in our cookie policy...OKRead More
Return to previous page
View cart “Eddie Hinton: Very Extremely DangerousEddie Hinton” has been added to your cart.
50% 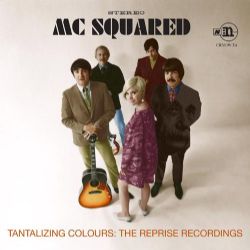 MC SQUARED—featuring folk renegades from The Back Porch Majority, as well as legendary studio musicians JIM KELTNER and RANDY STERLING—recorded four exciting singles for Reprise Records during 1967 and 1968.

Sounding like a unique hybrid of The Mamas and The Papas and Jefferson Airplane, the Los Angeles-based quintet failed to generate commercial success, and as a result their long-lost 1968 album has since been confined to the vaults…UNTIL
NOW!

The CD contains their four Reprise singles—two of which were produced by LENNY WARONKER (Van Dyke Parks, Randy Newman, Beau Brummels)—as well as the material that was to comprise their debut LP, all sourced from the original master tapes!

Filled with brilliant harmonies and psychedelically experimental left turns, MC SQUARED will appeal to fans of Curt Boettcher, Eternity’s Children, and The Millennium/Ballroom.