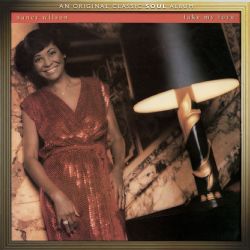 By 1980, legendary songstress Nancy Wilson had created an incredible catalogue at Capitol Records of 36 albums recorded over the previous two decades since the release of her 1960 debut, “Like In Love.”

Teaming with the producer/songwriting team of Larry Farrow and Carolyn Johns – who had worked with the song stylist on her 36th LP (Life, Love & Harmony, reissued in 2013 by SoulMusic Records as part of a 2-CD along with Music On My Mind, SMCR-5090D) – Nancy headed back into the studio in 1980 to record TAKE MY LOVE, her swansong album for Capitol.

The album consisted of seven original compositions, written or co-written by Farrow & Johns, with two tunes, ‘The Sadness In My Eyes’ and ‘I Loved You All The Time,’ penned by others, the latter a Leon Ware composition

Returning the award-winning vocalist to the kind of recording setting that had been commonplace for her during the ‘60s, the producers cut three songs in Capitol’s “A” studio live in front of an invited audience, utilizing the services of Hugh Davies, the original engineer on her Capitol debut LP along with a full fifty-one piece orchestra to mark what was unquestionably a historic occasion in Wilson’s amazing career.

Much requested by Nancy’s fans, TAKE MY LOVE is being reissued for the first time ever on CD worldwide and notes by renowned US writer A. Scott Galloway, including quotes from producers Farrow and Johns and Leon Ware.

4. THE SADNESS IN
MY EYES

6. I LOVED YOU
ALL THE TIME