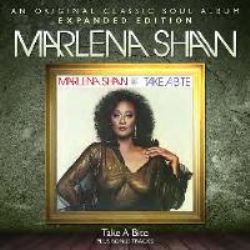 Marlena Shaw has been a consistently popular soul and jazz artist word wide for over four decades thanks to anthems like Woman Of The Ghetto and California Soul.

Originally released in 1979, Take A Bite – previously only available as a now-out-of-print Japanese limited edition CD – was her third and final album for Columbia Records but unlike its predecessors, the first part of the original LP had a specific musical concept and construct.

Working with highly successful disco producers Meco Menardo and Tony Bongiovi (with hits by Gloria Gaynor, etc.) and respected musical arranger/producer Harold Wheeler, the first six trackswere created as a non-stop dance music extravaganza, Suite Seventeen, strung together with a disco reading of Frank Sinatra’s It Was A Very Good Year and one of Marlena’s famous monologues ( I m A Foster Child*).

Two bonus tracks on this expanded edition are 12 single mixes of, Love Dancin and Marlena’s powerful reading of the Diana Ross classic, Touch Me In The Morning, major disco hits in 1980. Sleeve notes by Soul Music.com founder David Nathan nclude 2010 quotes from Marlena