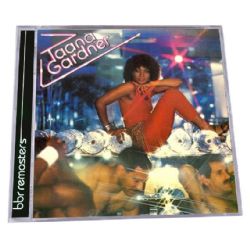 SKU: CDBBR0213
Categories: 9.95, Big Break Records, Physical, Sitewide Sale
Share:
Description
Taana Gardner was born in Newark, New Jersey and as a precocious young
girl always knew she wanted to sing and perform. Influenced initially by her
mother (who played piano in the Gardner home), and grandmother (who was an
opera singer) Taana wrote several plays
from the tender age of 11 and first appeared on stage as an actress in one of
her own plays. One of her plays even went on to be performed at the Lincoln
Center and The Apollo.
BBR favourite Dionne Warwick and also the great Tina Turner (amongst
others) inspired Taana in terms of her singing aspirations and in 1978 the
brother of Kenton Nix turned him on to Taana and suggested her for the project
he was working on with West End records. When Taana arrived for her first ever
studio session there was another group using the studio who, after hearing
Taana sing, invited her to contribute vocals to one of their tracks. That group
was Kid Creole and the Coconuts recording the album ‘Spooks In Space’ under the
name Aural Exciters for the US market, on which Taana became the lead vocalist.
A classic case of right place, right time.
TAANA GARDNER, was the product of the West End records sessions with
producer Kenton Nix which she had been initially lined up for. Nix had been
championed to the label by legendary DJ Larry Levan who had already been
spinning an instrumental version of Work That Body in his Paradise Garage sets.
‘Work That Body’ (Disco #10) became a big club hit…. So Nix recorded more
tracks with Taana including ‘When You Touch Me’ (Disco #10), included on this
album, and what has become West End’s biggest ever hit, ‘Heartbeat’, (R&B
#10) the classic mid-tempo groover worshipped by Larry Levan, two versions of
which are represented on this release amongst the many bonus tracks.
BBR is very proud to bring you TAANA
GARDNER, completely re-mastered and repackaged complete with extensive liner
notes and extended bonus content.
TAANA GARDNER is a must have for all
Soul and Disco fans out there!