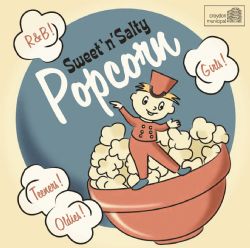 SKU: CR9003
Categories: 9.95, Croydon Municipal, Physical, Sitewide Sale
Share:
Description
• A unique collection! The first ever UK compilation of Popcorn, the continent’s answer to the Northern Soul scene. The atmospheric sound of Popcorn has been an underground club phenomenon in Belgium since the late sixties, and has spread across Europe and hit British clubs in the last ten years.
• Contains mod R&B rarities and club favourites like Jackie Weaver’s ‘The Tingle’ and Steve Karmen’s ‘River In My Blood’, as well as rarities by stars such as Johnny Nash and Roy Hamilton.
• Extensive sleeve-notes explain the history of the Popcorn scene, recently documented in Frieze magazine.
• Will appeal to fans of soul, girl groups, Latin grooves, R&B and fifties rock’n’roll.
• Most of these tracks appear on CD for the very first time.
• This album has been mastered by Pete Wiggs of Saint Etienne, using the latest software to ensure the best possible sound.
Avalaible  27/01/2014
Additional information
Tracklist
1. La Tanya         11. Lily's Lament
2. Some Of Your Lovin' 12. Elephant Walk
3. The Tingle         13. River In My Blood
4. Laugh My Heart         14. Continental Strut
5. Rebel Heart         15. You'll Come Back
6. Kisses That Shake The World 16. Third Window From The Right
7. Easy Chair         17. Just A Piece Of Paper
8. I Really Really Love You 18. Find Another Girl
9. Oh What A Day         19. Johnny With The Gentle Hands
10. To The One I Love 20. She Makes A Nice Cup Of Tea