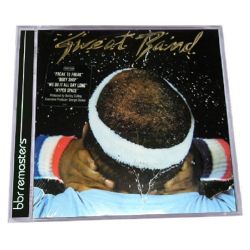 Sweat Band, the self-titled, 1980
debut album by the P-Funk spin off act was the first official release on
the Uncle Jam Record label, formed
by Funkateer in Chief George Clinton (visionary behind the many headed
R&B, Funk, Rock and Psychedelic musical juggernauts that were Parliament and
Funkadelic, or “That Parliafunkadelicment Thang” if you like) and his business
manager Archie Ivy.

The band itself was formed by P-Funk
bassist Bootsy Collins (one of very few to hold a
candle to Funk bass pioneer Larry Graham) and had previously released records
under the name Bootsy’s Rubber Band but after losing the rights to the
name Rubber Band to a folk music group
of the same name Bootsy had to make a change and Sweat Band was born. Bootsy, having
served his time initially in a group called the Houseguests with brother Phelps
“Catfish” Collins (the group backed up James Brown for a time in the early
seventies cutting such gems as “Talkin’ Loud, Saying Nothing”) he was invited
to join the P-Funk revolution by Clinton and became an integral part of the
movement and it’s most famous face after Clinton due to his exuberant and
infectious persona which backed up his incredible bass riffs.  The group also boasts arguably three of the
greatest Funk musicians to have graced fans with their talent with Bernie
Worrell on keyboards (Funkadelic) and horn players Fred Wesley and Maceo Parker
who were integral to the James Brown and P-Funk sounds.

As a result every track on SWEAT BAND delivers the solid Space Funk
grooves you would expect from a P-Funk record including “Freak To Freak”, a #25
US R&B hit and #44 Dance hit, “Body Shop”
(the second single), “Love Munch” and “Jamaica”, the latter two tracks
having been co-written by Maceo Parker.

With Bootsy himself in the producer’s chair, ably assisted by Clinton as
executive producer SWEAT BAND has all the hallmarks of the P-Funk sound and
doesn’t miss a trick.

BBR is very proud to add another heavyweight R&B artist
to our catalogue in the form of Bootsy Collins and his SWEAT BAND.  Newly re-mastered and repackaged with
extensive liner notes and bonus content.

SWEAT BAND is a must have for all P-Funk, R&B and Soul
fans out there!