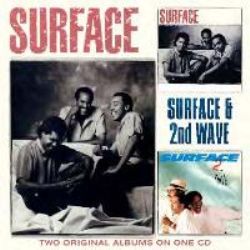 In the mid-to-late 1980s, there was a tendency to regard r&b and soul as the smooth, near vacuous sound of the dance floor, having little to do with what had happened in the 1960s and early 1970s. But while there were a lot of artists jumping onto the bandwagon, one trio quickly earned the respect of those who enjoyed music with a touch of class and melody.

Surface featured the threesome of Bernard Jackson, David Conley and David Townsend. Together they carved out some of the best songs of the era, and delivered them with a style and passion that made them favourites, and also established that you could be fashionable without divesting yourself of the roots of the music. Surface made it to number 55 on the main US chart (number 11 on the r&b equivalent) and was laced with substance and songs which were both well crafted and symptomatic of what Surface had to offer. Listening to the big hits from Surface is enough to convince anyone that this was a world class act. Happy would make it to number 20 on the US pop charts and got to number two on the r&b one; in the UK this climbed to number 56.
Meantime, Lately got to number eight on the r&b countdown. But Surface goes beyond the hits. It spans the spectrum of emotions and shows the trio in their best light.
2nd Wave, which is today regarded by many aficionados as their finest collection has a selection of songs which have come to define Surface. Tracks such as I Missed, got to number three on the r&b charts, Closer Than Friends (the band’s first number one r&b single; also reached number 57 on the main US chart) and Shower Me With Your Love (got to number five on the US pop charts their biggest hit up until that point). All of this propelled 2nd Wave into selling more than a million copies, even though it peaked in the US main chart at number 56 (on the r&b chart, this got to number five, the band’s biggest success).
As songwriters, singers and musicians the three principle members of Surface created a body of work that works on so many levels.
Additional information
Tracklist
Surface
Let's Try Again / Happy / We're All Searchin' / Lately / Gotta Make Love Tonight / Who Loves You / You're Fine / Lady Wants A Man / Girls Were Made To Love / Feels So Good /
2nd Wave
Shower Me With Your Love / Closer Than Friends / Can We Spend Some Time / You Are My Everything / I Missed / Black Shades / Hold On To Love / Where's That Girl