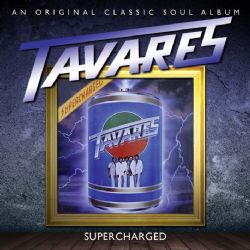 The brothers TAVARES had already racked up seven best-selling albums and twenty-one U.S. R&B hit singles by the time SUPERCHARGED, their eighth Capitol LP was released in 1980.

The New Bedford, Massachusetts-based family group – formed in 1964 – had achieved international fame in the mid-‘70s thanks to hits such as ‘It Only Takes A Minute’ (from the album In The City, reissued by SoulMusic.com Records in 2011 on SMCR 5022) and ‘Heaven Must Be Missing An Angel’ (on Sky High! reissued on SMCR 5023).

With production by Benjamin Wright (former musical director for Gladys Knight & The Pips) and Bobby Colomby of Blood, Sweat & Tears fame, SUPERCHARGED included the Top 10 U.S. R&B/Top 50 pop hit, ‘Bad Times’ and the Top 50 pop single, ‘I Can’t Go On Living Without You.’

Other key cuts on SUPERCHARGED, a Top 20 U.S. R&B charted album, included ‘Why Can’t We Fall In Love,’ (co-written by Deniece Williams, Carole Bayer Sager and David Foster); and ‘We Both Tried’ and ‘I Don’t Want You Anymore,’ written by Grammy-winner Foster and Bill Champlin. Star players on the LP – previously only reissued as a Japanese CD – include Jay Graydon, Greg Phillinganes, Harvey Mason, Steve Luthaker and James Jamerson Jr.

Notes by renowned U.S. writer Kevin Goins include quotes from a 2011 interview with Pooch Tavares for this reissue.

Press:-
“Anyone who grew up in the seventies will fondly remember Tavares’ music. They were one of the most successful US soul and disco bands of the seventies. Between 1973 and 1979, they released what seemed like one successful single after another. This led to Tavares having three US R&B number singles, while ten of their singles entered the US R&B top ten.”
Derek’s Music Blog March 2012

5.
I CAN'T GO ON LIVING
WITHOUT YOU

6.
I DON'T WANT YOU
ANYMORE

8.
GOT
TO HAVE YOUR LOVE