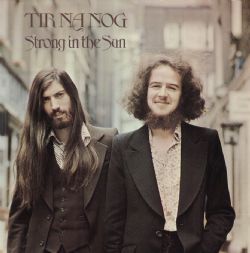 SKU: ECLEC2351
Categories: 10.95, Esoteric Recordings, Esoteric Sale, Physical, Sitewide Sale
Share:
Description
·
NEWLY
REMASTERED EDITION OF THE CLASSIC 1973 ALBUM BY IRISH PROGRESSIVE FOLK GROUP
TIR NA NOG – PRODUCED BY MATTHEW FISHER
·
REMASTERED
FROM THE ORIGINAL MASTER TAPES
·
WITH A RARE
BONUS TRACK
·
BOOKLET WITH
FULLY RESTORED ARTWORK & NEW ESSAY
Esoteric Recordings are pleased to announce a new
remastered edition of the classic 1973 album “STRONG IN THE SUN” by TIR NA NOG.
This legendary Progressive Folk duo featured
the talents of LEO O’KELLY and SONNY CONDELL. Formed in Dublin in 1969, the duo
travelled to London to make a name for themselves on the UK folk circuit,
earning a contract with Chrysalis Records in 1970. Securing a support slot with
Jethro Tull, TIR NA NOG came to the attention of a rock audience. The duo
became a fixture on the concert circuit, opening for acts such as The Who,
Elton John and Procol Harum and were also championed by John Peel. “STRONG IN
THE SUN” was released to acclaim in 1973 and was produced by MATTHEW FISHER of
PROCOL HARUM fame. The album was a step in a new direction for the band,
adopting rock instrumentation. Nevertheless, the record ranks as one of the
finest by the band.
This Esoteric Recordings reissue has been newly
remastered from the original CHRYSALIS RECORDS master tapes and features the
bonus track ‘THE MOUNTAIN AND I’ and a booklet that fully restores all original
album artwork with a new essay.