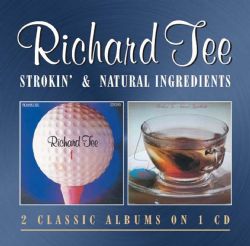 ·       Both of these albums were originally
released on Bob James Tappan Zee label, and these two albums were also produced
by Bob James.
·       Richard Tee worked with so many
superstars in the jazz field including George Benson, Grover Washington Jr
& Hank Crawford, but could also turn this hand to pop, and played keyboards
for Paul Simon, and featured in the band that backed Simon & Garfunkel for
their epic 1981 Central Park Concert. Richard was also the founding member of
the band Stuff. Sadly Richard passed away in July 1993.
·       The albums “Strokin’” & “Natural
Ingredients” featured many fine jazz musicians including guitarist Eric Gale,
Drummer Steve Gadd, percussionist Ralph McDonald and Horn players the Brecker
Brothers & Tom Scott to name just a few.
·       Stand out tracks on these albums are
‘Every Day’ which Richard co-wrote with Bill Withers, Stevie Wonder’s ‘Jesus
Children Of America’ and Willie Dixon’s ‘Back Door Man”.
·       Sleeve notes by Mojo’s Lois Wilson.
Available 21/10/2013
Additional information
Tracklist
Reviews (0)