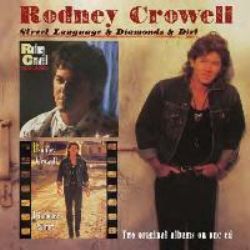 Rodney Crowell was one of the most gifted songwriters of the Texas honky-tonk school of the 1970’s and 80’s. The 1986 acclaimed album Street Language, was an eclectic effort co-produced by Memphis soul legend Booker T. Jones, and feature Billy Joe Walker, and John Hiatt.

Crowell finally broke through commercially in 1988 with Diamonds & Dirt, a record which generated a string of five number one singles with It’s Such a Small World (a duet with Rosanne Cash), I Couldn’t Leave You If I Tried, She’s Crazy for Leavin’ (co-written by Guy Clark), After All This Time, and Above and Beyond . Keys To The Highway was also very successful. Rodney won a Grammy in 1989 for the
Best Country Song:
After all This Time and was inducted into the Nashville Songwriters Hall of Fame in 2003. Co-produced by Memphis soul legend Booker T. Jones, and features Billy Joe Walker, and John Hiatt.
Additional information
Tracklist
Street Language
Let Freedom Ring / Ballad Of Fast Eddy / When I'm Free Again / She Loves The Jerk / When The Blue Hour Comes / Oh King Richard / Looking For You / Stay (Don't Be Cruel) / The Best I Can / Past Like A Mask
Diamonds & Dirt
Crazy Baby / I Couldn't Leave You If I Tried / She's Crazy For Leaving / After All This Time / I Know You're Married / Above And Beyond (The Call Of Love) / It's Such A Small World / I Didn't Know I Could Lose You / Brand New Rag / The Last Waltz
Reviews (0)