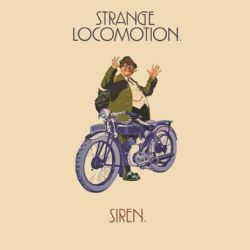 SKU: TURPD3
Categories: Cherry Red Records, Cherry Red Sale, Physical, Sitewide Sale
Share:
Description
Cherry Red is delighted to announce the next releases for
the rejuvenated Turpentine Records, the label founded by the late
singer-songwriter/author/artist KEVIN COYNE.
STRANGE LOCOMOTION was the second and final album by Kevin Coyne with
Siren, the band he founded with former Bonzo Dog Band bassist Dave Clague and pianist/guitarist
Nick Cudworth.
The LP was originally issued on John Peel’s Dandelion label in 1971.
STRANGE LOCOMOTION has been out-of-print on CD for many years.
This deluxe 2-CD edition has been re-mastered, with a whole bonus disc
of rare studio recordings from the period, previously only available on
fanclub-style releases.
Also boasts the first release on CD of ‘Lillian’, a song that only
appeared on the US Elektra edition of the LP, together with another US-only
album addition, the 7” UK A-Side ‘The Stride’.
The booklet features an interview with founder member Dave Clague,
recorded specially for this release.
Includes rare and previously unseen photos and cuttings of Siren in
their heyday.
An in-depth look at an underrated band, and a fascinating
glimpse at the formative recordings of an artist who would inspire John Lydon,
Sting, Ben Watt and Will Oldham and would collaborate with Robert Wyatt, Andy
Summers, Dagmar Krause, Brendan Croker, Gary Lucas and The Mekons’ Jon
Langford.
“The band which blew
the cobwebs out of my head.” Jac
Holzman
“Siren just came as a breath of fresh air really,
in the same way that like a generation later The Ramones did. When you just
thought ‘Thank God for that!’ You hadn’t realised how bored you’d become…” John Peel, 1997