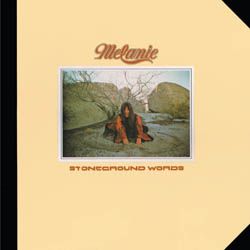 “Stoneground Words” was the first album in the UK to be released on her own label (Neighborhood Records) in 1972.

Regarded by many Melanie fans as her finest album.

The booklet includes all the photos that were part of the original album release.

Features two bonus tracks ‘Bitter Bad’ a 1973 single that was not featured on any album and ‘Seeds’ (Long Version) that includes her recitation of the ‘Gather Me’ Poem.

All songs were written by Melanie with the exception of ‘My Rainbow Race’ which is a Pete Seeger song.

Singles taken from the album were ‘Together Alone’ and ‘Do You Believe’.

UK music publication Melody Maker hailed this album as “the most sophisticated she’s made”.

Available for the first time on CD.
N.B: This title is released 25th September 2015 and will not be dispatched until this date.

2. BETWEEN THE ROAD SIGNS

8. SONG OF THE SOUTH