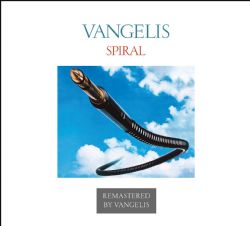 Esoteric Recordings are proud to announce the release of newly remastered and sonically enhanced editions of the albums recorded for the RCA and ARISTA labels by VANGELIS. All of these reissues come in deluxe digi-pack designs, with new masters personally supervised by VANGELIS.

The magnificent “SPIRAL” was VANGELIS’ third album for RCA Records. Released in 1977, the album was recorded at his personal studio in London, Nemo and was a defining Electronic album of the era, with VANGELIS demonstrating his total mastery of the synthesizer technology of the period. Pieces such as the majestic “To the Unknown Man” brought Electronic music to new dimensions.

This Esoteric Recordings release (undertaken with the full approval and supervision of VANGELIS himself) features a rare and sought after bonus track, previously unissued on CD, “To the Unknown Man (II)”, released as a B-side of the single “To the Unknown Man” in 1977. It also includes a booklet that restores the original album artwork.