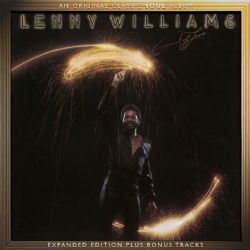 SKU: SMCR5117
Categories: 9.95, Physical, Sitewide Sale, SMR Sale, SoulMusic Records
Share:
Description
• Following the success of CHOOSING YOU (reissue on SoulMusic Records in 2014, SMCR-5116), his debut album for ABC Records, Lenny Williams really hit his stride as one of the premier black male vocalists of the ‘70s with the 1978 release of SPARK OF LOVE which became his best-selling and a gold album for the Arkansas-born, California-raised singer/songwriter.
• Lenny first came to the attention of the U.S. record-buying public as the lead singer for funk/soul band Tower Of Power from 1972-1975 on now-classic hits such as ‘What Is Hip?’ and ‘So Very Hard To Go.’ Prior to that, he recorded singles for Fantasy Records and Atlantic. Other solo projects included a one-off solo LP with Warner and one album for Motown (“Rise Sleeping Beauty”).

• As he recounted in liner notes for this reissue of SPARK OF LOVE (an expanded edition with three single edits) by renowned US writer, Rashod Ollison, one of the songs on the Motown LP was ‘’Cause I Love You’ which Lenny had been performing live to great audience response.  When it came to recording his sophomore ABC project, Lenny and producer Frank Wilson (known for his work with  Eddie Kendricks, The Four Tops and others) decided to re-record the song as a ballad. Subsequently, the song has become Lenny’s timeless signature tune, featured in numerous soundtracks and sampled by major rap and hip-hop artists, although never issued as a single.
• This 2014 SoulMusic Records reissue also includes US R&B hit singles, ‘You Got Me Running’ and ‘Midnight Girl.’
Available 17/03/2014
Additional information
Tracklist
1. I STILL REACH OUT BONUS TRACKS
2. YOU GOT ME RUNNING 9. YOU GOT ME RUNNING (US Single)
3. MIDNIGHT GIRL 10. MIDNIGHT GIRL  (US Single)
4. THINK WHAT WE HAVE   11. I STILL REACH OUT (US Single B-side)
5. 'CAUSE I LOVE YOU
6. CHANGES
7. HALF PAST LOVE
8. LOVE CAME AND RESCUED ME
Reviews (0)