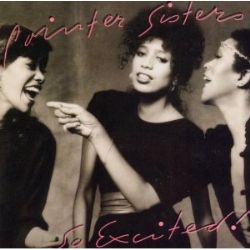 The Pointer Sisters were one of the most successful female groups the
music industry has seen with 18 Top 20 hit singles and 10 top 40 albums
shared between the US Pop and R&B charts. In 1982 the Grammy
award-winning sisters released the Richard Perry produced, SO EXCITED!,
on Planet Records. The Sisters were backed by members of the band Toto
on the album.

SO EXCITED! features such classics as the top 20 hit,
American Music and the hugely popular title track, SO EXCITED!,
written by Anita, June and Ruth Pointer with the album’s Associate  Producer Trevor Lawrence. SO EXCITED! reached the Billboard Top 30
but later went on to become the group’s most recognizable Top Ten hit
when a remix featured on the triple platinum selling follow up album
Break Out.

Also included are the Dance hit If You Wanna Get Back
Your Lady and the group‘s popular rendition of Prince‘s I Feel For You
which would became a huge hit for Chaka Khan two years later.

SO EXCITED! reached #24 on the Billboard R&B album chart and became a
huge catalogue seller for the group in the mideighties. BBR introduces
the original full version of SO EXCITED! for the first time on CD. This
edition features extensive liner notes with interviews from Anita ands
Ruth Pointer and Remixed bonus tracks.

Additional information
Tracklist
1. I’M SO EXCITED
2. SEE HOW THE LOVE GOES
3. ALL OF YOU
4. HEART BEAT
5. IF YOU WANNA GET BACK YOUR LADY
6. I FEEL FOR YOU
7. HEART TO HEART
8. AMERICAN MUSIC