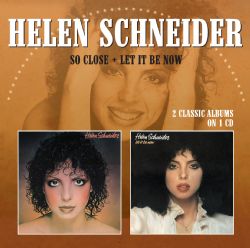 SKU: MRLL8
Categories: 9.95, Morello, Morello Christmas Sale, Physical, Sitewide Sale
Share:
Description
At last Helen Schneider’s long-lost first two albums are available on
CD. Anyone who bought the vinyl of these
two fantastic albums in 1977 and 1978 will be hugging themselves with delight at
the prospect of having digitally re-mastered versions.

With “So Close” and “Let It Be Now” Helen was destined to be the new
young great American song stylist following in the wake of Ella Fitzgerald, Judy
Garland and Barbra Streisand, but things didn’t work out that way. In 1978 Helen left America for Germany where
until 1984 she achieved great success as a rock singer.
She has remained in Germany and has played lead roles in Sunset
Boulevard, Cabaret and Evita. In 2006 she received the DIVA – German
entertainment prize, for lifetime achievements.
“So Close” was produced by Ron Dante; “Let It Be Now” by Tony Camillo.