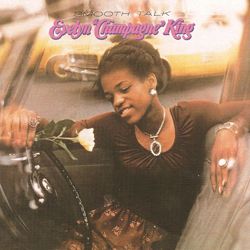 Smooth Talk made #8 R&B and #14 Pop as well as achieving gold certification and spending a year on the album charts. The 12″ Disco mixes and 7″ radio versions of Shame and I Don’t Know If It’s Right are included as bonus tracks. BBR introduce the first ever expanded re-master of this album on CD.

Liner notes include detailed interviews with Evelyn and producer T. Life. This long sought-after CD re-master is a must for all Soul, Disco and Funk fans.