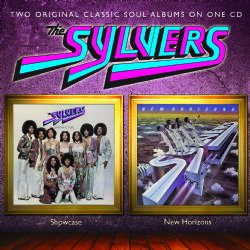 Los Angeles-based family group The Sylvers – four of whom had performed as The Little Angels on shows with Johnny Mathis and Ray Charles – had already experienced a measure of chart success in the U.S. with three albums and four R&B singles for MGM/Pride Records between 1972-1974 when they signed with Capitol Records in 1975.

The nine-member team consisted of Olympia, Leon, Charmaine, James, Edmund, Ricky, Angie, Pat and Foster teamed up with former Motown producer/songwriter Freddie Perren who had worked with The Jackson Five among others to work on their label debut SHOWCASE.

The result was immediate success: the first single, the now-classic ‘Boogie Fever’ reached No. 1 on the U.S. pop and R&B charts. The follow-up ‘Cotton Candy’ became another Top 20 R&B hit and with four tracks written by Leon, SHOWCASE became a Top 60 pop and Top 30 R&B best-seller.

The 1976 follow-up LP, Something Special spawned the hit single, “Hot Line”; in 1977, the group (now seven in number with the departure of Olympia and Charmaine) wrote and produced their third Capitol set, NEW HORIZONS with Leon (who would go on to have major success as a producer working with The Whispers, Shalamar and Lakeside among others) writing or co-writing most of the tracks including the Top 20 R&B hit, ‘Any Way You Want Me.’

Both albums are making their worldwide CD debut with this release which includes liner notes by renowned US writer Rico Washington.