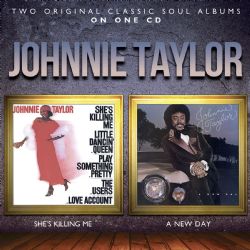 •    One of the true mainstays in the world of soul music for some decades, the late Johnnie Taylor (1934-1999) – tagged ‘The Soul Philosopher’ – created a solid legacy of recordings starting in 1963 with Sam Cooke’s SAR label through a great period of hits with Stax Records (including the classics ‘Who’s Making Love,’ ‘Jody Got Your Girl And Gone’ and ‘Cheaper To Keep Her’) before signing with Columbia Records in 1975, achieving worldwide success in 1976 with ‘Disco Lady,’ the first-ever platinum single.

•    Beyond his Columbia debut “Eargasm”, Johnnie’s subsequent albums for the label included “Disco 9000” (the soundtrack for a 1977 film); his last two sets for the label, 1979’s SHE’S KILLING ME (previously only available as a rare Japanese CD) and 1980’s A NEW DAY (making its worldwide CD debut) are presented on this 2014 SoulMusic Records’ two-on-one reissue.

•    Both albums featured production by both Brad Shapiro (known for his stellar work with Millie Jackson, Wilson Pickett and many others) and the late Don Davis (who masterminded Taylor’s recordings from 1968 on), Davis cutting tracks In Detroit and Shapiro in Muscle Shoals. Johnnie himself co-produced one cut, ‘I Can’t Leave Your Love Alone’ with Frank Johnson on SHE’S KILLING ME.

•    While neither album achieved notable chart or sales impact at the time of release, a retrospective review of the music reveals that it is in keeping with Taylor’s smooth-yet-always-soulful approach, highlights include the 1979 album’s title track, the soulful ‘Love Account,’ ‘The Heart Break Kid’ and the standout ‘Sylvia’ (featuring soul group Enchantment on background vocals).  Notes by distinguished writer Matt Bauer include quotes from producer Shapiro and others.

NB: This product is released September 15th and will not be dispatched before this date.