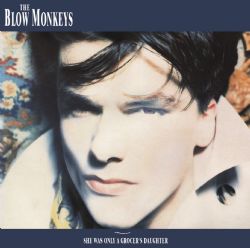 She Was Only A Grocer’s Daughter: Deluxe Edition
Blow Monkeys

•    THE BLOW MONKEYS were formed in the early 1980s by singer and songwriter Robert Howard (stage name: Dr. Robert). Combining the glamour of Roxy Music with the energy of post-punk, the sophistication of nu-jazz and the vocal stylings of Marc Bolan, they signed to RCA in 1984.

•    Third album SHE WAS ONLY A GROCER’S DAUGHTER from 1987 was their most successful, driven by the success of the Top 5 hit single ‘It Doesn’t Have To Be This Way’. It also boasts the hits ‘Out With Her’ and ‘(Celebrate) The Day After You’ with the legendary Curtis Mayfield.

•    This re-mastered deluxe edition boasts the best of THE BLOW MONKEYS’ non-album B-sides  from the period (including 1988’s ‘This Day Today’, which dated from the album sessions) and alternative mixes from the period. Many tracks make their digital debut.

•    The package boasts three previously unissued demos and recordings made by the band during the sessions for the album, including the otherwise unheard Dr. Robert songs ‘Ghetto Girl’ and ‘Checking Out’. Also unveiled is the demo for ‘It Doesn’t Have To Be This Way’.

•    Dr. Robert has been interviewed for the sleeve-notes and has co-compiled this reissue.

•    THE BLOW MONKEYS are playing several shows across the summer to support this reissue.

•    The band have been extremely active in the past two years, with a brand new album Feels Like A New Morning, deluxe reissues of their first two albums and a 3-CD retrospective on Sony.

(alias Out With Who?)

(alias It’s Got To Be A Hitch)