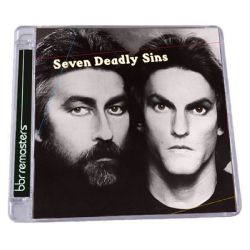 •    Two of the disco era’s many innovative producers were Laurin Rinder and W. Michael Lewis. Rinder, from Hollywood, had several years under his belt as a session musician before meeting the younger Lewis on the gigging scene in 1968. In the early 70’s. When the pair were doing session work for the label American Variety International (AVI Records) label head Ray Harris asked if “they knew anything about this new music called disco?” After visiting the local clubs and absorbing the emerging scene the pair set to work on their first disco project, El Coco, in 1975. Their success with El Coco would see the duo go on to cut at least 30 albums worth of material up to 1982, including the projects Le Pamplemouse (with vocals from The Jones Girls), In Search Of Orchestra, Saint Tropez and Tuxedo Junction.

•    In 1977 the duo released SEVEN DEADLY SINS on AVI Records. A seven track, mostly instrumental concept album covering each of the aforementioned sins, this was their first of five albums released under their own name. Opening sin “Lust,” a seven minute journey drifting through a multitude of synth swells and melodies over a smooth, lightly percussive mid-tempo beat, was featured on Dimitri from Paris’s ‘After The Playboy Mansion’ compilation. “Sloth” is a surprisingly up-tempo instrumental affair using European styles which borders on the manic at times. “Gluttony” has a decidedly proto-techno dark synth bass punctuated by several uplifting melodic sequences using guitar and horns. “Pride” is an exuberant slice of classic late seventies jazz/funk with deft Hammond and clavinet grooves and expansive horn sections. “Envy (Animal Fire),” the a-side to b-side “Lust,” and the only single from the LP, provides more disco stomp with funky guitar, soaring synth’s and percussive breaks, as well as the only vocal on the record. “Anger” is full on, with heavy African percussion throughout and a short Afrobeat style musical section towards the end.

NB: This title is released on October 27, 2014 and will not be dispatched until this date.