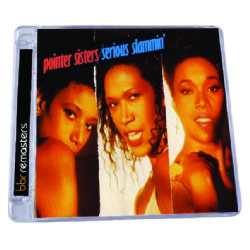 SKU: CDBBR0125
Categories: 9.95, Big Break Records, Physical, Sitewide Sale
Share:
Description
The Pointer
Sisters were one of the most successful female groups the music industry has
seen with 13 top 20 singles and eight top 40 albums shared between the US and
UK pop charts. SERIOUS SLAMMIN’ was
their ninth & final album with Richard Perry and saw him take the group
into the harder electronic funk sound akin to Cameo/Gap Band hits of the
period.
HE TURNED ME OUT was the first single and was also the opening
theme to the cult movie Action Jackson. This single release saw the sisters
return to the top 40 of the R&B and Dance charts.
The second
single I’M IN LOVE was written by
Jonathan Butler and Simon May and was originally a minor UK hit for Ruby
Turner. The Pointer Sisters version became their final R&B hit on RCA
Records as well as making the top 40 on Billboard’s Adult Contemporary chart.
Featured as a
bonus track on this edition of SERIOUS SLAMMIN’ is the 12” extended remix of BE THERE from Beverly Hills Cop 2. After
the huge success of Neutron Dance, featured in Beverly Hills Cop, the Pointers
were invited to contribute to the soundtrack of the follow up movie. BE THERE was produced by 80’s hit maker
Narada Michael Walden fresh from his hits with Whitney Houston and Aretha
Franklin. The 12” remix featured here was mixed by Shep Pettibone and became
the groups final hot 100 hit in 1987. This marks the first time the song has
ever appeared on a Pointer Sisters album
Additional information
Tracklist