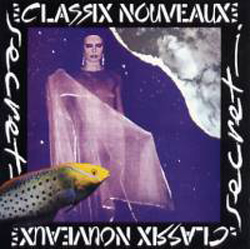 Although Classix Nouveaux’s more guitar-heavy sound separated them from the mostly synthetic rhythms of Japan and Ultravox, the group’s appetite for stylish fashion and danceable keyboards had them quickly associated with the new
romantic movement. Formed in 1979 with Sal Solo (vocals), Mik Sweeney (bass), BP Hurding (drums), and Jak Airport (guitar), Classix Nouveaux originated in the punk underground, namely from the ashes of the controversial X-Ray Spex.

After banshee wailer Poly Styrene departed from X-Ray Spex, the remaining members held auditions for a replacement singer. The charismatic Solo won the approval of Styrene’s former bandmates and they went on to record the album NIGHT PEOPLE (1981), followed by LA VERITE (1982). SECRET (1983) turned out to be a very appropriate title for most of the world, as this final album was Classix Nouveaux’s best kept secret. With top American producer, Alex Sadkin, at the helm Classix veered between the artistic experimental of Peter Gabriel and the synthy pop of the Thompson Twins.

However if you are Polish, then this is THE Classix Nouveaux album as far as you are concerned, since it yielded massive hits with NEVER NEVER COMES and HEART FROM THE START. The release coincided with Classix’s first tour of Communist Poland. Few Western bands had been there, but the band arrived at Warsaw airport to hordes of screaming fans. Something akin to Beatlemania followed them there over the next three years.

SECRET did not produce major hits, but probably does represent the best studio artistry ever achieved by Classix Nouveaux.

Additional information
Tracklist
1. ALL AROUND THE WORLD
2. MANITOU
3. HEART FROM THE START
4. THE FIRE INSIDE
5. FOREVER AND A DAY
6. NEVER NEVER COMES
7. THE UNLOVED
8. WHEN THEY HAVE ALL GONE
9. NO OTHER WAY