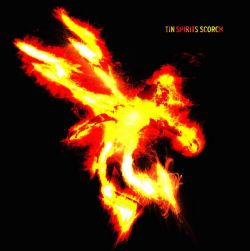 Esoteric Antenna are pleased to announce the release of the album ‘Scorch’, the much anticipated follow up to Tin Spirits debut album ‘Wired to Earth’.

As you would expect of a band that includes XTC’s 6-string genius Dave Gregory, ‘Scorch’ is a celebration of guitars and harmony with songs that immediately captivate and engage. Lovingly crafted over two years ‘Scorch’ was mixed ‘old school’ with fingers on faders by acclaimed producer Paul Stacey (Black Crowes, Noel Gallagher), resulting in a sonic experience guaranteed to be a highlight of this year’s new releases.

Along with Dave Gregory, Tin Spirits’ fellow Swindonians Mark Kilminster (Vocals, Bass) and Doug Mussard (Drums), as well as the Australian import Daniel Steinhardt (Guitar, Vocals) notably of TheGigRig, have carved themselves a unique niche being unashamedly progressive yet entirely accessible. From the rapturous tones of the instrumental opener ‘Carnivore’, to the introspective anthem ‘Little Eyes’ and the progressive epic ‘Garden State’, “Scorch” is an album that shows Tin Spirits have truly come of age with one of the most exhilarating and satisfying releases of 2014.