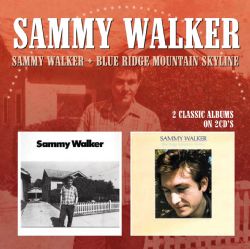 Sammy Walker’s mentor Phil Ochs wrote in 1975 “Sammy Walker is the finest songwriter and singer I have come across in the last dozen years.  I am certain he has a great future ahead of him”. These are the two albums recorded for Warner Brothers in 1976 and 1977.

The self-titled album containing all Sammy’s own material – considered by many to be his best release – is very Dylan-esque.  The second album “Blue Ridge Mountain Skyline” includes songs written by Walker with the exception of ‘Waitin’ For A Train’ (Jimmie Rodgers) and ‘Dust Storm Disaster’ (Woody Guthrie).

Musicians include Bill C. Graham, who accompanied Glen Campbell and many other country stars on fiddle and Lyle Ritz, on bass, who went on to greater fame as a ukulele player.  The great James Burton, Elvis’s guitar player for many years, also appears playing dobro on “Sammy Walker”; his standout solo on ‘Days I Left Behind’ is something special.

Both albums were recorded in Hollywood with Producer Nik Venet who had worked with Linda Ronstadt and John Stewart.

If you like early Bob Dylan then Sammy Walker could be just the thing for you.