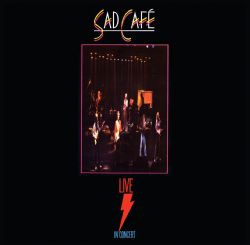 •    Manchester a city renowned for producing a number of quality bands over the years and Sad Café were one such band.

•    Recorded live at Manchester’s Apollo Theatre across three nights in 1980 this 2CD collection showcases the band at their best, live on stage.

•    Led by the incomparable Paul Young on vocals who later went on to front Mike & The Mechanics, this live release is a timely reminder of a band at their commercial peak.

•    This CD contains many stage favourites and major hit singles ‘Strange Little Girl’, ‘My oh My’ and of course ‘Every Day Hurts’.

•    Released with liner notes and additional bonus track ‘(I Believe) Love Will Survive’.

NB: This title is released on October 20, 2014 and will not be dispatched until this date.