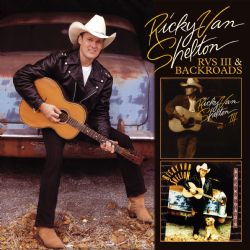 SKU: TBIRDAM039
Categories: 9.95, Physical, Sitewide Sale, T-Bird Americana
Share:
Description
Few stars of
country music have risen as fast, shone as brightly as Ricky Van Shelton.
Between 1987 and 1992 he released more than 20 hit singles – including 10 #1’s,
5 of them consecutive – and 5 Top 10 albums, three of which also made #1. His
records were played continuously on country radio, and he went from winning the
Country Music Association’s “Horizon Award” for best newcomer in 1998 to
becoming their “Male Vocalist of The Year” just 12 months later.

“RVS III” was a
success that most artists could only dream of. The album hit No 1 and the hit
singles just poured out of it. ‘I’ve Cried My Last Tear For You’ was a
chart-topper, the 50s-style crooning of ‘Statue Of A Fool’ made it to No 2, as did ‘I Meant Every
Word He Said’, while ‘Life’s Little Ups and Downs’ could have been viewed as a
disappointment, only reaching No 4.
“Backroads”, released in 1991, was another huge success with Shelton at the
height of his powers. The album itself stalled at No 3 (although it went
platinum) but the first three singles from the record all hit the top of the
charts. The first was the jolly ‘Rocking Years’, a duet with Dolly Parton
(which also appeared on Parton’s ‘Eagle When She Flies’ album that same year),
and which was followed by ‘I Am A Simple Man’ and ‘Keep It Between The Lines’.
The title track, reached No 2. By any standards, Shelton’s career was rocking.
Additional information
Tracklist