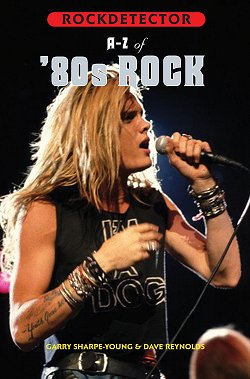 Rockdetector: A To Z of ‘80s Rock
Garry Sharpe-Young and Dave Reynolds

In the 80’s Hard Rock reigned supreme. Albeit fuelled to the max by bubblegum power chords, skyscraper backcombed hairdos, eyeliner and (horror of horrors)…spandex, artists such as Quiet Riot, Ratt, Motley Crue, Skid Row, Dokken, Guns n’ Roses, Warrant, Slaughter, L.A. Guns, Great White, W.A.S.P. and Bon Jovi reigned supreme. Established bands too fully embraced the ‘image is everything’ culture and Kiss, Aerosmith, Van Halen, Alice Cooper, Whitesnake and Heart all enjoyed renewed flushes of success. Lita Ford’s dangerous curves, Lorraine Lewis’ pout and Vixen’s foxy looks dominated MTV. These artists roamed the globes arenas, biting platinum chunks of flesh out of the US album charts and sporting ever more extreme fashion faux pas with each album. Los Angeles seethed with CFC enclouded hopefuls. They might have looked like French Poodles but were as aggressive as the wiliest of wolves in their quest for fame.

The 80s was primarily about the USA but the reverberations were keenly felt in Europe too. As Def Leppard launched themselves into the record books and Europe’s Joey Tempest launched a million dodgy perms. The 80s was a good time to be into Rock. Motley Crue summed it all up with ‘Girls, Girls, Girls’ and Warrant rammed the point home with ‘Cherry Pie’ because that is exactly what this whole movement was about. Little did they know those songs would prove prophetic, Vince Neil later sweating it out in the strip bars whilst Jani Lane sweated just as profusely in the kitchens.

Dinosaurs before their time, they were extinct before the ink had dried on the contracts. As the Grunge meteor was arcing across the horizon the majors still fell over themselves to snap up Tuff, Pretty Boy Floyd, D’Molls, Vain and Bang Tango.

While it lasted, it was glorious. The music industry loved every million selling minute of it. This is the book that chronicles every cheap thrill and maps out every mascara caked moment. Each and every band, whether able to pack out Wembley or Wigan, is documented with full biographies and global discographies direct from the world’s biggest Rock devoted database – Rockdetector