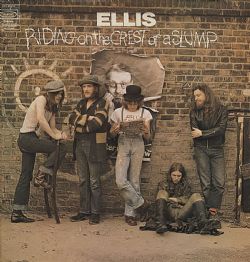 Riding On The Crest Of A Slump: Remastered Edition
Ellis

Esoteric Recordings are pleased to announce a newly re-mastered CD release of the classic 1972 debut album by the British rock outfit, ELLIS. Formed in December 1971, the band was the brainchild of former LOVE AFFAIR vocalist STEVE ELLIS. Teaming up with celebrated keyboard player ZOOT MONEY, the band took a harder rock direction with jazz overtones. The line-up of the band was completed with the addition of guitarist ANDY GEE, drummer DAVE LUTTON (formerly with Heavy Jelly and The Grease Band) and bass player JIM LEVERTON (formerly with FAT MATTRESS and JUICY LUCY). Championed by former JIMI HENDRIX EXPERIENCE drummer MITCH MITCHELL, the band secured a contract with Epic Records in 1972 and recorded their debut album the same year. Produced by another well-known admirer, ROGER DALTREY, “Riding on the Crest of a Slump” was an impressive album and contained many fine tracks including the classic ‘El Doomo’ (later a huge hit for Yugoslavian band Smak in Europe in 1976), the fine ‘Angela’ and ‘Your Game’.

This Esoteric Recordings edition has been remastered from the original Epic master tapes and features a booklet that restores the original album artwork and includes a new essay.