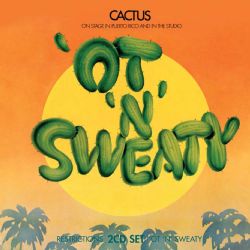 SKU: HNECD020D
Categories: 10.95, HNE Recordings, HNE Sale, Physical, Sitewide Sale
Share:
Description
Cactus were formed in 1969 by founder members
of Vanilla Fudge; Tim Bogert on bass and Carmine Appice on drums. Although
originally planned to feature Rod Stewart and Jeff Beck, Cactus’s line-up was
eventually completed by Jim McCarty (from Mitch Ryder’s Detroit Wheels and The
Buddy Miles Express) on guitar and Rusty Day (from The Amboy Dukes) on vocals
and harmonica.
Their bluesy, gritty rock became a big
influence on future generations of hard rock and heavy metal bands, including
Montrose, AC/DC, Van Halen and Monster Magnet.
Following “Restrictions”, the third and last
LP to feature Jim McCarty and Rusty Day, they were joined for “’Ot ‘N’ Sweaty”
by Leaf Hound and Atomic Rooster vocalist Pete French, Werner Fritzschings
(guitar) and Duane Hitchings (keyboards). The first side of the original LP was
recorded live in Puerto Rico at the Mar y Sol pop festival, and the second
featuring studio recordings – the album ends with a somewhat incongruous cover
of ‘Underneath The Arches’, inspired by touring with Rod Stewart & The
Faces.
With remastered audio and one bonus track,
this set features liner notes from Classic Rock’s Malcolm Dome based on recent
interviews with Carmine Appice. Cactus are currently touring with a line-up
featuring McCarty and Appice.