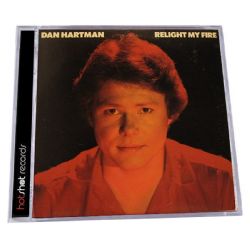 Daniel Earl Hartman a.k.a. DAN HARTMAN was an American musician, singer, songwriter and producer who hailed from Harrisburg, Pennsylvania. He is best known for his disco hits ‘Instant Replay,’ ‘Love Sensation’ and ‘Relight My Fire’ as well as penning the second biggest hit for the Edgar Winter Group, ‘Free Ride,’ of which he was a member. Having schooled himself playing bass and writing songs for his first band The Legends (which also included his brother Dave) Hartman joined the Edgar Winter Group and appeared on three of their albums before going solo in 1976.

After initially releasing the magnificently titled promotional album “Who Is Dan Hartman and Why is Everyone Saying Wonderful Things About Him?,” which was a retrospective on his career until that point, Hartman scored big in 1978 with the #1 Disco smash ‘Instant Replay’ (from the album of the same name) which also crossed over to the U.S. And U.K. Pop charts.

In 1979 Hartman released RELIGHT MY FIRE (R&B #67, Pop #169), and again hit the top of the Disco charts with the title track, a bonefide disco classic that featured Hartman’s friend Loleatta Holloway on vocals and is preceded by the understated “Vertigo” which perfectly sets your anticipation before the main event.  ‘Relight My Fire’ was subsequently covered by U.K. boy band Take That featuring Lulu, who took their version to the top of the U.K. Pop charts in 1993.

Throughout the LP Hartman keeps the party energy in full flow and on the opener ‘Hands Down’ we are treated to Stevie Wonder and Edgar Winter trading licks on harmonica and sax respectively.  ‘Just For Fun’ has a very solid syncopated groove in contrast to the tone of the lyric and exemplifies Hartman’s production style. On closer ‘Free Ride’ Hartman shows off his deft production skills by taking the hit he wrote for the Edgar Winter Group and changing the rhythmic emphasis to take the track firmly into the dance floor realm.

This BBR/Hot Shot Records re-master is a must have for all Disco, Dance and Pop fans out there!