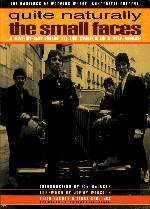 Quite Naturally – The Small Faces
Keith Badman and Terry Rawlings

Meticulously researched and written by Keith Badman and Terry Rawlings, this book contains previously undocumented details of their TV, Radio, Concert appearances and promotional work. This is accompanied by dozens of unpublished photographs, along with interviews from each band member and a silence breaking interview with Jimmy Winston, who speaks about the band for the first time in 30 years.

“Lazy Sunday”, “Itchycoo Park”, “Tin Solider”, “All Or Nothing” – these were just some of the classics created by the ultimate British pop group. From 1965 until their break-up in 1969, these cheeky young London Mods were responsible for some of the finest most entertaining hits of the 60’s which remain as fresh, vibrant and relevant today as they did back then – their hits have timeless appeal for fans old and new. The small faces style ranged from soulful R&B to psychedelic rock mixed with a touch of old time music hall. It was this bizarre combination which made a production like “Lazy Sunday” such a rare delight. Fronted by ex-child actor Steve Marriott, the band were all lively east end kids who started their music careers to earn pennies in pubs for fun, never dreaming they would become teenage idols eventually – rock legends.

“The Darlings Of Wapping Wharf Launderette” has certainly gone a long way towards contributing to the recent resurgence of interest in the band. While the appreciation of the Small Faces continues to grow thanks to the championing praise from the present day faces such as Paul Weller and Noel Gallagher. Not bad for a band that broke up nearly 30 years ago.