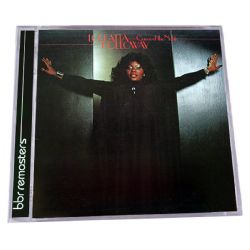 Loleatta Holloway was a dance music legend. Her amazing vocal talents gained her the reputation as one of the premier vocalists of soul and dance music during the 70’s and 80’s. Holloway started her singing career with Queen of Gospel, Albertina Walker (and her Caravans) before striking out on her own. She released her first single “Rainbow ‘71” on the fledgling Apache label before moving to Aware to record her first two albums prior to her work with Gold Mind/Salsoul.

QUEEN OF THE NIGHT, released in 1978 on Gold Mind/Salsoul Records, was the follow up to her breakthrough LP for the label in 1976, simply titled “Loleatta” and re-united her with Salsoul stalwart Norman Harris who took on the production duties. With QUEEN OF THE NIGHT being the singers second LP for this disco dominated label it confirmed her transformation from Southern soul songstress to disco royalty.

Norman Harris’ soaring arrangements and infectious rhythms, allied with Holloways powerful vocals ensured that QUEEN OF THE NIGHT would gain commercial as well as critical success.

Opening track ‘Catch Me On The Rebound,’ (R&B #92) with its fluid, funky bass line, chopping rhythms and sweeping strings sets the tone for the album. Along with the opener, ‘Mama Don’t, Papa Won’t’ and ‘I May Not Be There When You Want Me (But I’m Right On Time)’ were also huge club hits, collectively peaking at #9 on the disco charts and all represented on this release in extended form. However the greatest success from the album was Holloways stunning duet with Bunny Sigler, ‘Only You,’ which peaked at #11R&B and #87 Pop, giving the singer her biggest ever hit.

BBR is proud to present QUEEN OF THE NIGHT. This expanded and re-mastered edition comes complete with extensive liner notes and added bonus material.

This BBR re-master is a must have for all R&B, Soul and Disco fans out there!

1. CATCH ME ON THE REBOUND

7. TWO SIDES TO EVERY STORY

11. CATCH ME ON THE REBOUND (Walter Gibbons Disco Madness Remix)