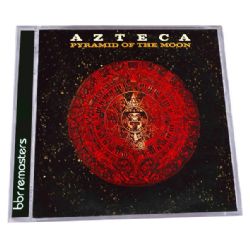 Pyramid Of The Moon
Azteca

SKU: CDBBR0206
Categories: 9.95, Big Break Records, Physical, Sitewide Sale
Share:
Description
AZTECA, formed in 1972 in Oakland, was the vision of brothers Coke and
Pete Escovedo following their successful time playing along side Latin-funk
trailblazers, Santana. They are widely regarded to be the first large-scale
group that combined multiple musical elements centred around and built as a
Latin orchestra.
Born in the legendary Bay Area of San Francisco, Pete and Coke Escovedo
grew up immersed in the Latin music so prevalent on the East coast of the US.
Influences of Mambo and Salsa bred their love of percussion and they organised
mambo sessions to hone their vocal and percussive skills surrounded by local
musicians who played in the Caribbean style that captivated their musical
passion.
Sometimes numbering up to 25 members on stage, AZTECA fused an array of
musical styles and instruments ranging from horns, woodwinds, guitars, drums
and multiple keyboards, percussionists and vocalists.
AZTECA featured a wealth of successful musicians including bassist Paul
Jackson, known for his work on numerous Herbie Hancock albums, drummer Lenny
White who played alongside some of the best Jazz artists of the time including
Miles Davis, Freddie Hubbard and Stanley Clarke. The line up also included
Grammy Award Nominee, Tom Harrell. AZTECA would also serve as a platform for
Sheila E, daughter of Pete Escovedo, to develop her skills as a percussionist.
BBR is very proud to bring you PYRAMID OF THE MOON, originally released
on Columbia Records in 1973, completely re-mastered and repackaged complete
with extensive liner notes and extended bonus content.
PYRAMID OF THE MOON is a must have for all Jazz, Latin, Funk & Rock
fans out there!

Additional information
Tracklist
1. SOMEDAY WE’LL GET BY
2. MAZATLAN
3. FIND LOVE TODAY
4. WATCHA GONNA DO
5. NEW DAY IS ON THE RISE
6. MEXICANA, MEXICANA
7. RED ONIONS
8. LOVE IS A STRANGER
9. A NIGHT IN NAZCA