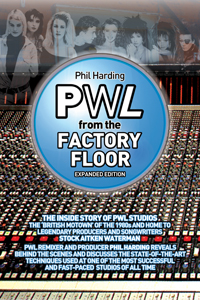 To the modern pop world, Stock, Aitken and Waterman have taken on something of a legendary status in recent years. The PWL label and studios produced so many hits in the 1980s that their name became synonymous with success, and they created the template so expertly worked today by their protégée Simon Cowell today is undeniable.

Refreshingly and affectionately frank, ‘PWL – From The Factory Floor’ tells the inside story of one of the most successful and fast-paced music studios of all time. Phil’s pivotal role provides a uniquely broad perspective, extending from the top of the organisation, mixing many classic SAW hits, down to the bottom , training up-and-coming engineers, as well as involvement in the creative, business (and diplomatic!) aspects of being a critically-acclaimed producer in his own right and developing a profile and client base under the management of Pete Waterman.

After a sold-out limited release in 2009, the book has undergone extensive development into this Expanded Edition, and contains a wealth of new material. Highlights include Phil’s behind-the-scenes journey through the eventful rise (and fall) of PWL, commentary on the working styles and sounds covered during PWL’s history, detailed recollections of specific, classic PWL mixes, in-depth interviews on working with some of the most significant artists of the time, a comprehensive guide to the south London studio building and its evolution, an A-to-Z of PWL staff, a fascinating day in the life photo tour from recently rediscovered home video footage, Phil’s PWL discography – a comprehensive guide to his many hundreds of releases, and a full review of Phil and his fellow producer Ian Curnow’s extensive personal archives and master tapes (including, for the first time, details on many PWL projects that remain unreleased and previously forgotten), and a new Harding/Curnow interview, looking back on their time working at PWL .

The book also takes in the technicalities of studio work, including a detailed case study of the mixing of a No. 1 single in the form of Kylie’s Hand On Your Heart, and information on the cutting edge technology and techniques used in making the studio a world leader. This, along with the inclusion of many previously-unseen photographs, makes ‘PWL From The Factory Floor – Expanded Edition’ a must-read for 80s, club, dance and pop devotees, contemporary music followers, studio technicians and creators and those with any interest in the extreme highs and lows that only pop music can provide.

Phil is still an in-demand writer, producer, mix engineer, guest speaker and lecturer. He speaks and lectures at Universities and Colleges around the UK, recently with Pete Waterman, and is currently Vice-Chairman of the Music Producers Guild and Chairman (MPG) of the Joint Audio and Media Education Service (JAMES). He is regularly featured and interviewed in music production magazines and websites and is remembered fondly by just about everybody who has worked with him. A rarity indeed in his business!