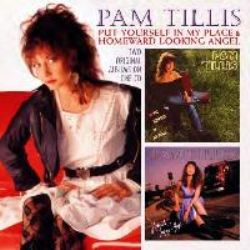 Put Yourself In My Place/Homeward Looking Angel
Pam Tillis

In 1989, Tillis, signed with Arista Nashville and released her label debut, Put Yourself in My Place, in 1991. The lead single, Don’t Tell Me What to Do, raced into the Top Five, giving Tillis her long-awaited breakthrough. Of the album’s five total singles, One of Those Things and Maybe It Was Memphis also made the Top Ten (as did the album). The success of the singles lead to the album being certified “Gold” by the RIAA that year, and reaching No. 10 on the “Top Country Albums” chart and No. 69 on the “Billboard 200” that year. Homeward Looking Angel was Tillis’ first album to be certified

“Platinum” by the RIAA. Tillis had two other successful hits from the album that reached the Country top 20, Do You Know Where Your Man Is and Cleopatra, Queen of Denial . While at Arista, Tillis recorded six albums, earning two gold and two platinum in the process. At one point, she was also married to songwriter Bob DiPiero, who co-wrote several of Pam’s singles. One of Tillis’ compositions, We’ve Tried Everything Else, was later recorded by Canadian country music artist Michelle Wright in 1994. Tillis also recorded the song and included it on this album.
Additional information
Tracklist
Put Yourself In My Place
Put Yourself In My Place / Melancholy Child / Maybe It Was Memphis / Blue Rose Is / Don't Tell Me What To Do / One Of Those Things / Draggin' My Chains / Ancient History / I've Seen Enough To Know / Already Fallen
Homeward Looking Angel
How Gone Is Goodbye / Shake The Sugar Tree / Do You Know Where Your Man Is / Cleopatra, Queen Of Denial / Love Is Only Human (Duet With / Marty Roe Of Diamond Rio) / Rough And Tumble Heart / Let That Pony Run / Fine, Fine, Very Fine Love / We've Tried Everything Else / Homeward Looking Angel