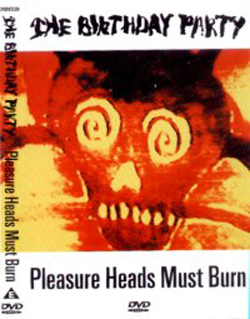 The first ever DVD to feature The Birthday Party, the internationally acclaimed band that launched Nick Cave onto the world stage.The Birthday Party are one of the great cult bands of all time, loved by a loyal army of fans at their height and incredibly influential on many of today’s young bands.

This DVD features a host of very rare material. The original promo videos for “Nick The Stripper” and “Deep In The Woods” are included, along with some extremely rare television performances from both British and Dutch TV.

Two complete gigs from the world famous Hacienda club in Manchester complete the package. The shows feature the band at the height of their powers in 1982 and 1983, and include “Pleasure Avalanche”, “The Six Strings That Drew Blood” and “Sonny’s Burning” from the Indie Chart hit “Mutiny / Bad Seed E.P.” The DVD is a must for fans of the band and Nick Cave admirers wishing to see the great man at the beginning of his career.