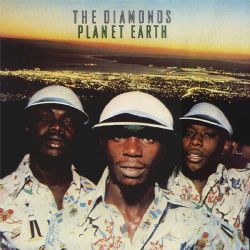 SKU: MILKCD2
Categories: 9.95, Hot Milk, Physical, Sitewide Sale
Share:
Description
Hot Milk is heating up the Britishspring time withits
secondrelease, The Mighty Diamonds “Planet Earth” and
“Planet Mars Dub.”
The Mighty Diamonds are Donald “Tabby” Shaw, Fitzroy
“Bunny” Simpson” and Lloyd “Judge” Ferguson
andhave been together since forming in the Trenchtown area
ofKingston, Jamaica in 1969 and werearguably the premier of all
vocal triosduring the roots reggae era with their sweet soul harmonies
and conscious lyrics.
Planet Earth is a Mighty Diamonds (curiously named The Diamonds on
release)vocal album from 1978 and Planet Mars Dub (credited to The
Icebreakers & The Diamonds) was the track for track dub counterpart album
released in the same year.
Rather than have one album come after the other in traditional “2
on 1″ fashion, this release sequences the vocal versions followed directly
by their dub to create a showcase / discomix / 12” style, that gives
listeners a chance to hear the vocal and dub back to back andexperience the
full extendednature of these tunes.
Planet Earth has never been released on CD and Planet Mars Dub is
increasingly becoming more difficult and expensive to find and this is the
first time that these two albums have been presented together. This is a jam
packed disc with over 74 minutes of classic roots reggae.
Sleeve notes are providedby well-respected reggae expert and
journalist John Masouri.
Singers and Players include Sly Dunbar on drums, Tommy McCook on Sax and
“blazing horn arrangements”, Earl “Chinna” Smith on guitarwith
production by Karl Pitterson at Compass Point Studios, Nassau, Bahamas.