We use cookies to ensure that we give you the best experience on our website. Click OK to accept and continue shopping, or find out more in our cookie policy...OKRead More
Return to previous page
View cart “Hello, Good Evening, Welcome. And Goodbye: Vinyl EditionCarter The Unstoppable Sex Machine” has been added to your cart. 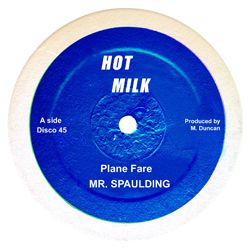 Recorded in England in 1986 and coming back to his spiritual home on Morris Duncan’s Roots Rockers label. Hinting at a recent stint in New York, these tracks are almost Wackies like in atmosphere, with Spaulding enjoying a more rub-a-dub stylee. ‘Plane Fare’ has the best “widdily, widdily, biddily, bong, skang” vocal heard since a particular Mouse and a foundation shaking dub version utilises all the studio’s effects units, all on Bobby Babylon. ‘Fantastic’ on the Throw Me Corn riddim produces memories of Jah Batta as Spaulding “drinks out of glass and not plastic!” Gussie P engineered deep down in the Dub Vendor basement.