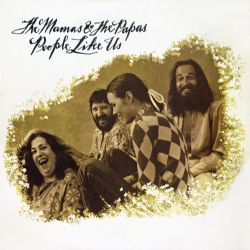 SKU: CRNOW37
Categories: 9.95, Now Sounds, Physical, Sitewide Sale
Share:
Description
DELUXE EXPANDED EDITION.
A reunion project, PEOPLE LIKE US was the final collaborative effort of THE MAMAS & THE PAPAS, a group that had defined a generation.
Like an out-of-focus, last-taken photograph of a deceased loved one, People Like Us has remained an important part of The Mamas and The Papas catalogue, but has miraculously been out of print on CD for many years—UNTIL NOW!
Included here are NINE bonus tracks, including the single version of John Phillips’ Billboard #32 solo hit, ‘Mississippi.’
The 16-page, full-colour booklet includes rare photos, and extensive liner notes penned by Richard Barton Campbell, featuring exclusive quotes from original band members.
ORIGINAL RECORDINGS PRODUCED BY PAPA JOHN PHILLIPS SOURCED FROM THE ORIGINAL MASTER TAPES!
Additional information
Tracklist