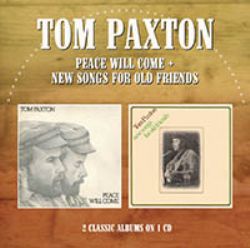 SKU: WMRLL44
Categories: 9.95, Morello, Morello Christmas Sale, Physical, Sitewide Sale
Share:
Description
• One of the all-time great singer songwriters to come out of the New York Greenwich Village folk scene of the early 60s.
• Both albums appear for the first time on CD.
• All songs composed by Tom Paxton.
• Enormously popular in Europe where he still tours every couple of years.
• At the historic 1969 Isle of Wight Festival Tom out-performed Bob Dylan – the audience chanting “Paxton! Paxton! Paxton!” for a full four minutes following his performance.
• “Peace Will Come” was released in 1972.  The title track was picked up by Pete Seeger and can be heard to this day at peace rallies across the world.
• A host of great British musicians perform on this album with backing vocals provided by Mary (Hopkin) Visconti.
• “New Songs For Old Friends” was released in 1973.
• Recorded live before an invited audience at the Marquee Club in London, it contains all new songs rather than regurgitating previously recorded material.  Guest singers and musicians include Mary (Hopkin) Visconti, Ralph McTell, Peter Sarstedt and Danny Thompson.
• Both albums are produced by Tony Visconti.
N.B This title is released August 14th 2015 and will not be dispatched before this date.
TRACK LISTING:
1. PEACE WILL COME
2. YOU CAME THROWING COLOURS
3. OUT BEHIND THE GYPSY’S
4. THE HOSTAGE
5. YOU SHOULD HAVE SEEN ME THROW THAT BALL
6. RETROSPECTIVE
7. JESUS CHRIST SRO (STANDING ROOM ONLY)
8. CALIFORNIA
9. I LOST MY HEART ON A 747
10. DANCE IN THE SHADOWS
11. WHAT A FRIEND YOU ARE
12. HOBO IN MY MIND
13. WHEN WE WERE GOOD
14. WHO’S BEEN PASSING DREAMS AROUND?
15. WHEN ANNIE TOOK ME HOME
16. KATY
17. FRED
18. WASN’T THAT A PARTY?
19. FACES AND PLACES
20. WHEN YOU SHOOK YOUR LONG HAIR DOWN
21. SILENT NIGHT
22. WHEN PRINCES MEET
Additional information
Tracklist
Track listing as above.
Reviews (0)