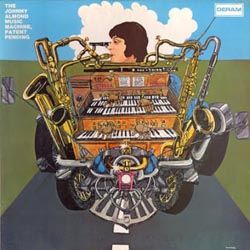 ESOTERIC RECORDINGS are pleased to announce the release of a newly remastered edition of the classic debut album by the acclaimed saxophonist and woodwind player Johnny Almond.

ESOTERIC RECORDINGS are pleased to announce the release of a newly remastered edition of the classic debut album by the acclaimed saxophonist and woodwind player Johnny Almond.

Johnny Almond first came to prominence through his work with John Mayall, Zoot Money, Alan Price and Chicken Shack, before he formed his own group in 1969. A truly original album, “Patent Pending” showcased Almond’s prowess as a composer and outstanding multi-instrumentalist, with him also playing Organ, Mellotron and Vibes in addition to a variety of Woodwind instruments.

This Esoteric Recordings reissue has been remastered from the original Deram master tapes and includes a booklet which fully restores the original album artwork and a new essay.