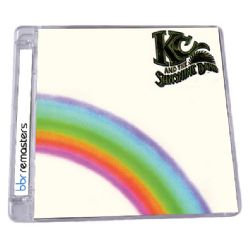 Part 3
K.C. And The Sunshine Band

SKU: CDBBR0187
Categories: 9.95, Big Break Records, Physical, Sitewide Sale
Share:
Description
Grammy award winners, KC & THE SUNSHINE BAND are
one of the most recognizable bands of the 70’s, scoring countless hits and gold
and platinum records all over the world during the decade with a style of dance
friendly R&B that helped to define the Disco era. They also went on to
become the first band since the Beatles to score four #1 Pop singles in a
12-month period.
Harry Wayne Casey and Richard Finch were introduced
to each other in 1972 and after hitting it off, began writing together and
formed KC & THE SUNSHINE BAND. They put out two singles on TK Records, ‘Blow Your
Whistle’, released in September ’73 and ‘Sound Your Funky Horn’ put out in
February of ’74. Both saw moderate success, however it was enough for TK
Records to want a follow up single and album.
It
was during this time while putting demos together that KC and Richard wrote
Rock Your Baby, which would later be recorded by George McCrae and released on
his debut album of the same name, giving him a #1 hit across the charts and
proving that Casey and Finch had what it took to write hit songs. Their second
album cemented this notion going triple platinum with a string of top singles
to match.
In
1976, KC & THE SUNSHINE BAND would release PART 3 which would go on to
become their second triple platinum album. Containing such worldwide hits as
(SHAKE, SHAKE, SHAKE) SHAKE YOUR BOOTY, which reached #1 in both the US Pop and
US R&B charts as well as scoring #9 on the US Dance Charts and a top 30
spot in the UK. The follow up, I LIKE TO DO IT also fared well in the US
winning itself a top 40 Pop position and climbing all the way to #3 on the US
R&B charts and a top 10 Dance spot. I’M YOUR BOOGIE MAN would follow and in
typical hit fashion soared to #1 on the US Pop charts, #3 R&B and #9 on the
US dance charts while KEEP IT COMIN’ LOVE completed the hit line-up, topping
the R&B chart and making the #2 position on the Hot 100.
BBR
is thrilled to bring you this wonderfully repackaged and beautifully re-mastered
edition of KC & THE SUNSHINE BAND – PART 3 complete with liner notes and
added bonus content.
Released
in deluxe Super Jewel cases, KC & THE SUNSHINE BAND – PART 3 is a must have
for all Soul, Funk, R&B and Disco fans out there!